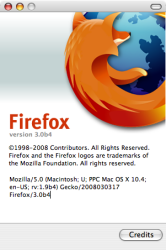 Mozilla Firefox 3 Beta 4 was released today. The release notes claim that more than 900 enhancements over the previous version have been included in this release. So far, I haven't noticed a real difference in my normal use. I guess that's a good thing, really. To me, that means we're working with a near production ready product.

Unfortunately, this version of Firefox 3 still does not fix the problem with Gmail (also known as bug 415252). That's not a deal-breaker in a beta release, but the problem must be resolved before the product can ship.