This afternoon I downloaded the Beta 3 version of Firefox 3 for my Mac OS X 10.4 (Tiger) notebook. One of the great things about Firefox 3 is that it uses Aqua, so the browser feels much more OS X friendly. On top of that, testing done by myself and others seems to suggest that Firefox 3 has a much smaller memory footprint. In fact, our impromptu testing showed that Firefox 3 used roughly half as much memory as the previous version.

I'm sure you can understand our disappointment, though, when we opened up Gmail and discovered this: 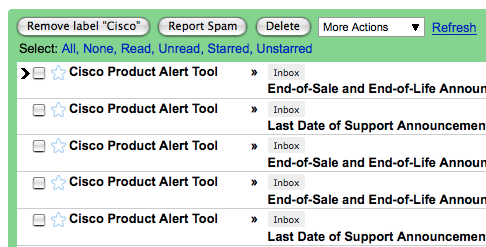 If it isn't obvious, there is a line break after the labels in the subject portion of the message display. This seems to mainly effect messages with long subject lines, but there didn't seem to be any rhyme or reason as to which short-subject messages were broken and which were not.

My first thought was that this was caused by my somewhat dainty 12" PowerBook display. But further testing proved that didn't really seem to matter. Only some of the problems were fixed by changing my browser size. I also did a little testing in Firefox 2 and discovered Gmail resizing flawlessly as I resized my browser.

Obviously, this is just broken behavior. Firefox 3 is still in Beta, and this is by no means a show-stopper. I'm sure it will be fixed by the time Firefox 3 goes live, but right now — it's really annoying!