ReadWriteWeb is highlighting the recent hubbub around the fact that IT staffs aren't shrinking despite the rapid adoption of cloud computing. It's always been assumed that outsourcing IT infrastructure would result in reductions in IT staffing. Although that is still generally assumed to be the future, recent studies have shown that the future is not here. In fact, IT hiring and salaries are still on the rise.

The theory is that IT departments are changing, but not shrinking.

The ReadWriteWeb article included a slide from the 2011 Future of Cloud Computing Survey Results presentation. 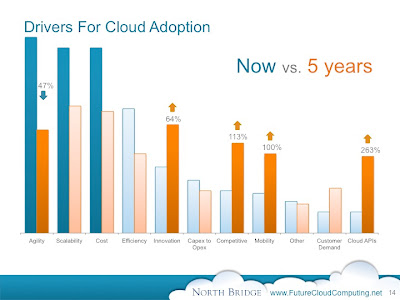 The thing I found most surprising about the North Bridge slide above was the relative unimportance placed on the switch from capex to opex as a driver for cloud adoption. My surprise is probably related to my long experience with SMBs who are usually more sensitive to capital expenditures.